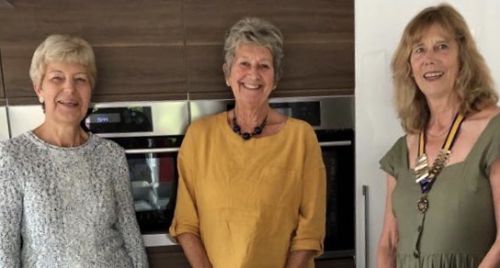 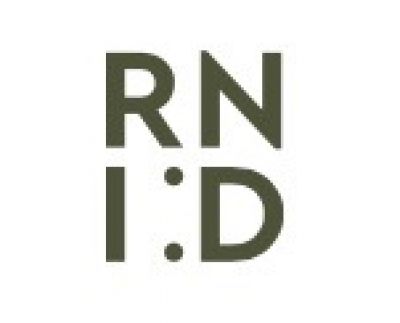 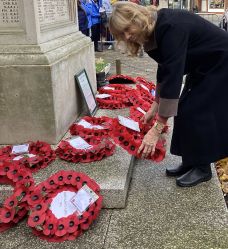 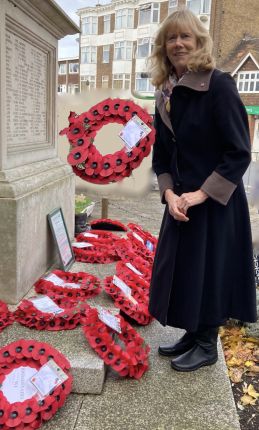 The service was taken by the Rev'd Jan Durrans and Paul Moore the Mayor of Broadstairs and St Peters.

Pat spoke on Inner Wheel as an organization, how it was important to understand what goes on, the 'closer you get to the heart of the organisation the sweeter things are'. Last year, in spite of lockdown people rose to the IW 88 Challenge. Pat spoke about  the positive impact of volunteering how it can stimulate health and wellbeing. To ‘give up time’ is not ‘giving it up’ actually. Anni Bignold in her President’s end of year report mentioned how ‘proud she was of us all in 'Broadstairs Inner Wheel’.

Pat went on to tell us about her chosen charity for the year, Dandelion Time: Transforming the lives of vulnerably children, who are struggling with the effects of trauma, abuse or neglect. Children can spend time on the Dandelion farm with animals and crafts to overcome emotional difficulties, to help them grow in confidence and begin to love and trust again.  Dandelion Time was started in 2003 by Dr Caroline Jessel. Vulnerable children are referred to the Cottage, also known as the Maidstone HQ which sits within picturesque West Farleigh. Occupying 22 acres of fields, gardens and woodland, this location provides families with opportunities to experiment, play and connect whilst relaxing into the healing embrace of natural world. Resident chickens, sheep, donkeys, guinea pigs and two cats ensure there is no shortage of jobs for families to become involved in.

Children are referred for 3 hours a week for between 10 and 15 weeks.

Time – sell ‘time’ or buy ‘time’.  60 minutes of time will buy 3 hours of therapy to help the children to find ‘a sense of hope for the future’. 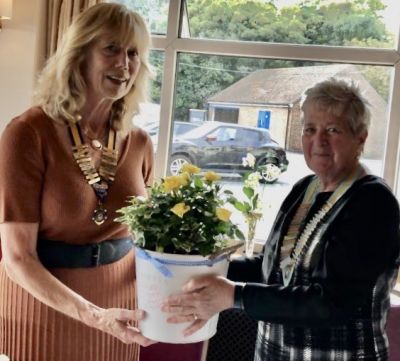 President Anni gave Pat a donation for her charity and a small personal gift.

Jill Barber gave the ' Vote of Thanks' saying how important it was the include the families as well as the children in the healing process and praised the wonderful work achieved by  Dandelion Time.

Our Summer Tea Party was a great success, we were so lucky with the weather. This was our first event after lockdown so everybody was really happy to be FREE to meet, catchup and enjoy each others company, as well as enjoying a most amazing tea in the most amazing garden.

Our thanks go to our local Inner Wheel  Clubs, Dover, Deal, Ramsgate, Margate, Canterbury, Westgate and Birchington and now the Lost forever Club - Herne Bay, for supporting our event.

Well done everybody it is hard work but well worth it, and we have made money for our charity MIND. 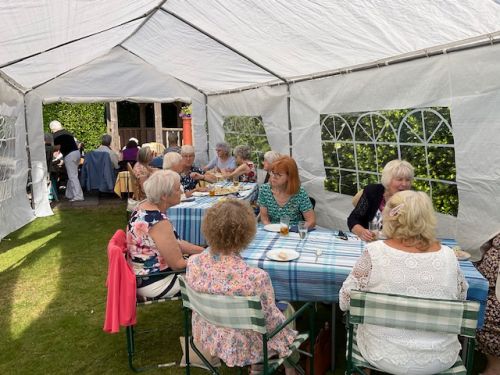 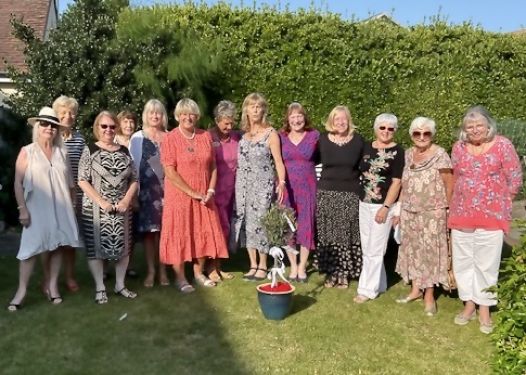 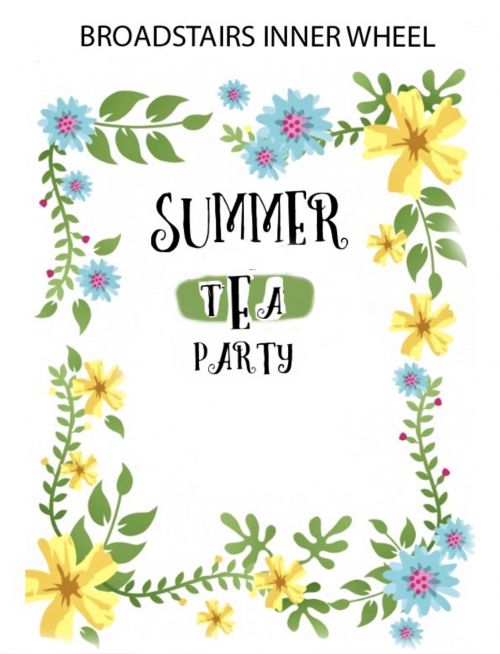 Come and enjoy the end of lockdown

District Chairmen, Christine and Sheila invite you to the Club Officers’ Assembly by Zoom on 22nd July at 10.00 am. This is an opportunity for all Club Officers to meet their counterparts throughout the District and to be reminded of their various roles. It is very helpful if each Club President, Secretary, Treasurer, International Service Organiser, Club Correspondent and Membership Officer can attend, or be represented by a deputy.  I know that many of you are very experienced in your roles but I do urge you to attend the Assembly as there will new information, particularly from our Chairmen, that will be of interest to you.

Monthly coffee morning for July, the first since lockdown, was held in the garden of the home of Dorothy Reid. It did turn chilly towards the end, but it was a great opportunity to meet and catch up.

Our Club birthday this year fell on a Saturday. We have an excellent party to celebrate at President Anni Bignold's house in Birchington. It was 'bring a plate' evening, with husbands. Everybody had an excellent time. A lot has changed in Inner Wheel during those 65 years and it was good to see  the Club is still strong in spite of challenging times.
At our Club meeting on the following Monday at North Foreland Golf Club, the celebration continued as Crusties Bakery provided a superb 'birthday cake' to mark the event. 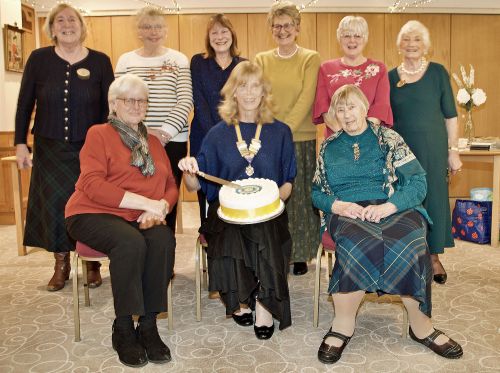 Anni is pictured holding the 'cake' surrounded by Past Presidents of the Club. 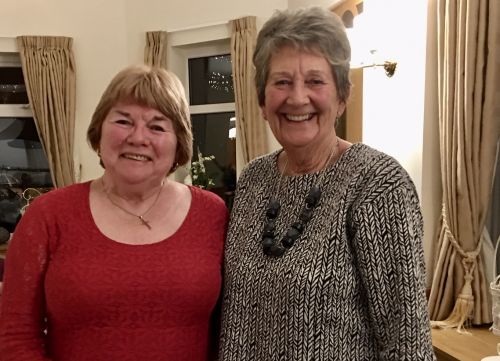 Our speaker on Monday 20th January was Janis Buckley chairman of the Margate, Cheerful Sparrows. Janis is pictured above left, next to our President for the evening, Jill Barber.

After nearly a hundred years of helping Thanet people Janis explained that unless the Charity can continue to raise much-needed funds, they will be facing the prospect of closure. The Charity is proud to have helped the QEQM hospital wards and to have supported our local community by working with caring professionals such as social workers and teachers. With 50% of children living in poverty in some areas of Thanet, the replacement of a broken washing machine, child's bed or school uniform can be a turning point for the whole family. 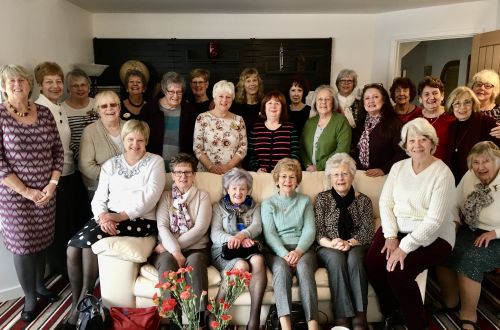 Funds raised will go to Porchlight

Our Wine & Wisdom held on Saturday November 16th at St Peter’s Church Hall was a great success. Charities  benefiting from this event include the  National Deaf Children’s Society, Multiple Sclerosis and Cancer Research. 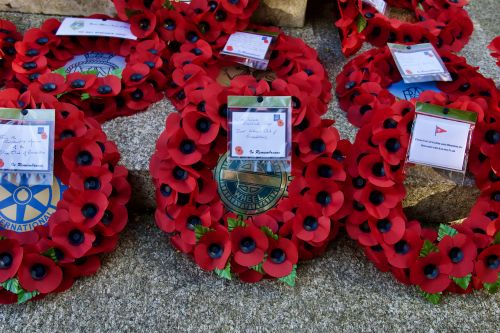 President of Broadstairs Inner Wheel, Anni Bignold & Alan Emby of Broadstairs Rotary, together lay a wreath in Remembrance of those who died for us during both World Wars.

"When you go home, tell them of us and say, for your tomorrow we gave our today" 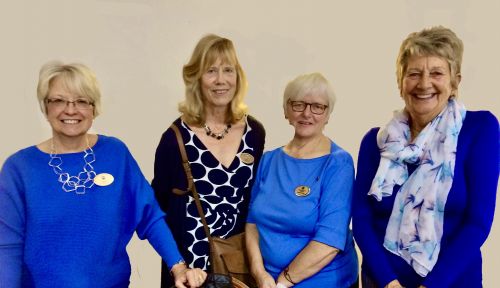 International Chairman Sheila Dicks is pictured with Anni Bignold President of Broadstairs Inner Wheel supported by other members of the Club, raising funds for the District Charity, Footsteps. The aim is to provide a brighter future for former street boys and orphans, in Kenya. The colour theme this year was bright blue. The day raised just over £3,000 helping to make the future look as bright as the colour suggests. Well done everybody!!

Our speaker for the evening was Jenny Matterface who gave a fascinating talk on the work of the CT10 Charities and the Gap Project.

The CT10 history began with a bequest to the Vicar of St. Peter's Church from Richard Culmer in 1485.

In his will he left 6 acres of farmland in the centre of what we now know as Broadstairs town centre. This includes the land between Vere Road, Alexandra Road and the Pathway.

This was farmland and the income used to relieve poverty and help the poor and needy. This land was to produce an income for the charity and the trustees have a duty to obtain the best result under Charity Commission regulations.

In 1726 Hannah Taddy left 4 acres in St. Peter's also to the church with similar aims. This is the land between Grafton Road and Reading Street Road.

Both parcels of land are now non-statutory allotments and bring in a regular income from rents.

Five other small charities were placed under the umbrella of what is known now as CT10 Parochial Charities but the main endowment is from the estate of Richard Culmer.

The Gap Project in Broadstairs is a vibrant and innovative charity serving the local community in an area of deprivation, using the fantastic facilities of Queens Road Baptist Church. Drop-in sessions provide a hot meal, laundry and shower facilities.

Broadstairs President Anni Bignold gave Jenny a small donation from the Club and Rita Rowlett gave the vote of thanks.

Provided by the Ladies of Broadstairs  Inner Wheel
Taken to the District Meeting in Ditton on Wednesday 23rd to be distributed by the International committee. 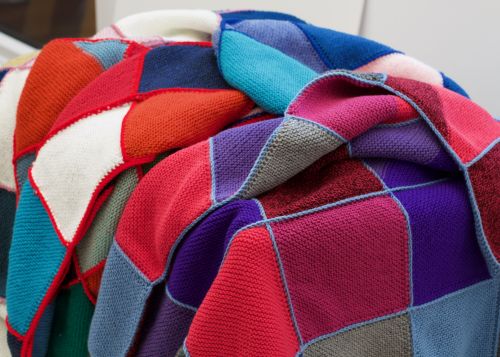 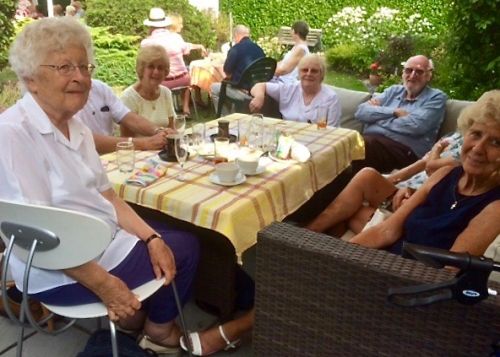 Anni  Bignold took over as President of Broadstairs Inner Wheel at the end of June and has already made a splash with her fund raising Summer Tea Party. Seventy people joined family and friends to enjoy an old fashioned garden party which included a glass of Pimms and cucumber finger sandwiches, without crusts. A total of £620 was raised giving a kick start  to the Inner Wheel fund raising year. 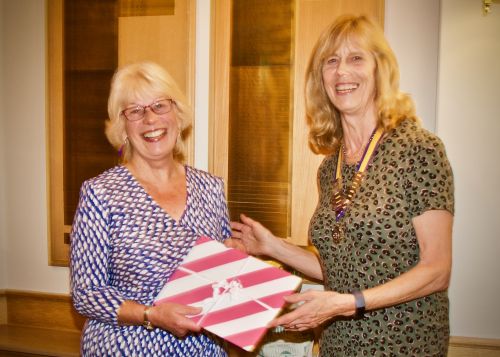 Fish & Chip supper available for an additional £5.50 a head.

Numbers to dorothy.reid7@btinternet.com by 1st November

The Real Story of Cinderella