What is Inner Wheel?

From its very beginnings Friendship and Service have always been at the heart of Inner Wheel.

Wives of Manchester Rotarians met, on the 15th November 1923, for the purpose of setting up a ladies' club to run along Rotary lines. Over the years since Rotary International had spread to Britain, with virtually no welfare or social services available for those in need, Rotary Clubs had endeavoured to do all they could to help alleviate the suffering of those around them, regularly involving their wives, who would form a committee then, once the project had been completed, disband until they were once again called upon to help.

The 27 ladies present, on that day, learned that the object of the club was to be twofold: firstly to foster friendship between the wives of Rotarians and secondly, without encroaching on the prerogatives of the men, widen their opportunities of service, which official club status would give them. With Mrs Margarette Golding as Chairman and Mrs Mabel Nixon taking on the dual role of Secretary/Treasurer, a temporary committee was formed, to take on the administrative duties and find a suitable meeting place.

Eager to progress, by the time of their next meeting, on 10th January 1924, (now celebrated annually as World Inner Wheel Day throughout the world), funds had been raised and 80 woollen baby garments knitted and delivered to St Mary's Hospital, in time for Christmas.

The Association of Inner Wheel Clubs is like a wedding cake with tiers - the largest and most important tier is at grass roots level with a Club, near you, in most towns and cities and large villages.

See the 19 clubs listed in this District.

The three Objects of Inner Wheel are;

Who can belong to Inner Wheel?

b) Women related to Rotarians/former Rotarians

We are part of the International Rotary Family. Many, though not all, of these Clubs have corresponding Rotary Clubs, and many work together with a Rotary club as well as alone.

The next tier is at District level - From those early days in Manchester, there are currently 611 clubs in Great Britain & Ireland, divided into 29 Districts and with approximately 15,300 members. The 29 Districts make up the Association in Great Britain and Ireland; again these broadly correspond with Rotary Districts. Our District 12 Executive are elected to serve the District.

The third tier is the GB&I Association; with a Governing Body and Executive Members representing all corners of Great Britain and Ireland.

The Association President for 2021 to 2022 is Betty Roberts,

Each District has a Member of Council who represents them on the National Committee.

Our Member of Council for 2021 to 2022 is Sheila Grainger. from the Crayford and Danson Club. 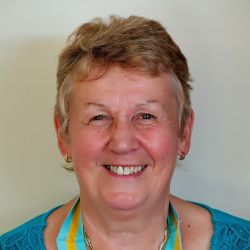 Active in 103 countries, with members in 3,895 clubs, it is one of the largest women's voluntary organisations in the world, and has representation at the United Nations.